Over 85 years of history

During the deep depression of 1933, a group of Yorkers gathered at the studio of Helen Weiser Ziegler and decided to form a community theatre, or “Little Theatre”. This was a very popular movement nation-wide. On February 5, 1933, this group met at the YWCA and officially organized the York Little Theatre, electing Edwin T. Moul as the first president.

From February through December they presented 16 one-act plays at the Women’s Club, the York Collegiate Institute and the YWCA. On December 14, 1933, York Little Theatre presented its first full-length public performance, LADY WINDERMERE’S FAN, at the Phineas Davis School Auditorium. 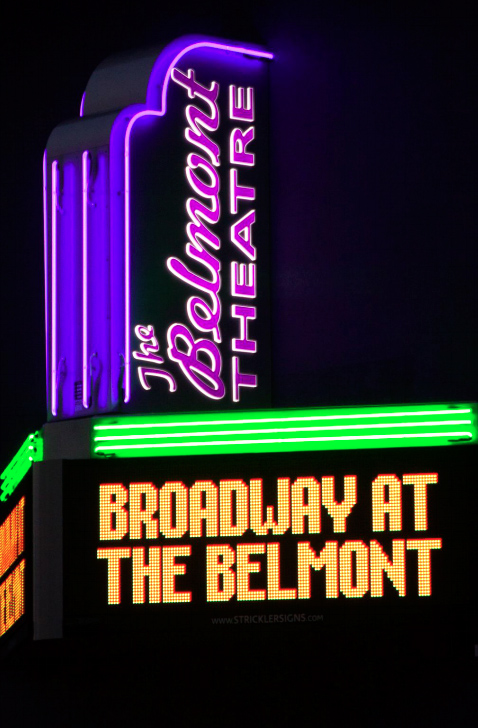 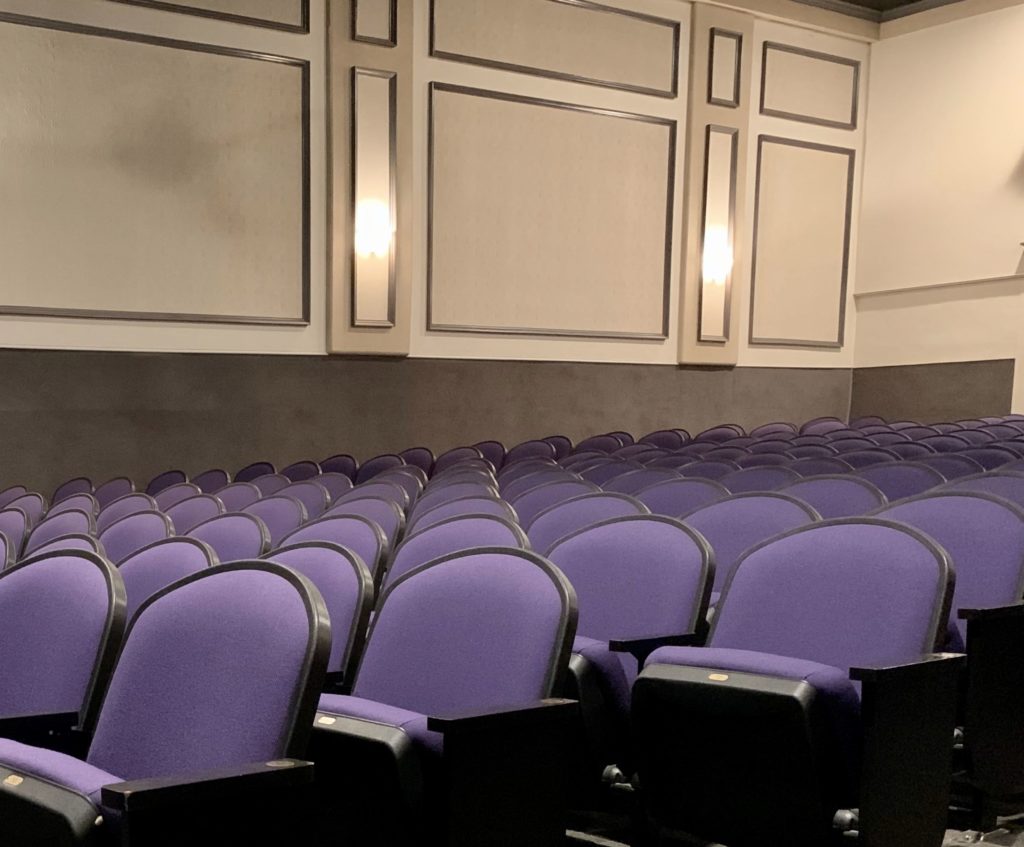 From then to now 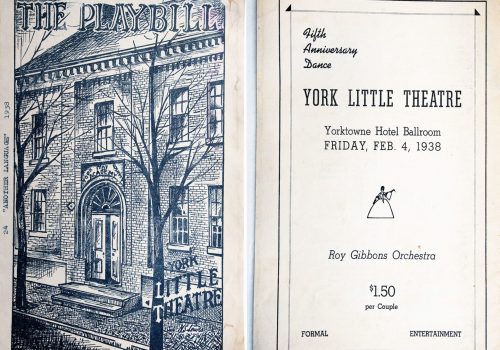 York Little Theatre (YLT) hired the first full-time director, J. F. Foster from Columbia University January of 1934 and YLT became chartered as a non-profit organization. In August, 1934, Helen Miller Gotwalt directed the first children’s play, ALADDIN AND HIS WONDERFUL LAMP. It was a benefit for the York Recreation Commission Playground Fund. The Recreation Commission sponsored YLT as a self-supporting sponsor. They shared the Commission’s offices at the old York County Academy Building at 153 N. Beaver Street.

As the Great Depression continued, Yorkers embraced the opportunity to forget their problems by creating and attending shows, many of which were presented at the Phineas Davis Junior High School. During the 1938-39 season, YLT performed its first Shakespeare production, A MIDSUMMER NIGHT’S DREAM. This was also the first season that choreography was used in a YLT show and all of the costumes were made by volunteers. Attendance was at a record high of 3,492 patrons.

At the forefront of stage excellence

The Depression ended, but the country was soon at war. Women assumed many of the duties formerly performed by men. They constructed sets, ran crew and created lighting designs. In the 1941-42 season, the theatre presented Clare Booth Luce’s THE WOMEN, utilizing a cast of all women. YLT casts also performed for local industry and they entertained service men at area camps to build morale during this difficult time. They also raised money for the 6th and 7th War Loan Drives. In 1944, they raised $871,900 for the War Loan Drives, receiving a Citation from Treasury Secretary Henry Morgenthau “for patriotic cooperation rendered on behalf of the War Finance Committee of York County”.

When World War II ended, YLT wanted to have a home of its own. In September, 1945, YLT’s board approved the purchase and renovation of St. Andrews Parish Recreation Hall on East Prospect Street. This building had been the former home of the York Safe and Lock Athletic Club. The renovation goal of $25,000 included a large stage, a fly gallery, generous seating, offices and a rehearsal room. This goal was not met, however, and the theatre sold the building in 1948 for $15,000, which was $4,000 more than they had paid for it. Today it is the home of Mt. Moriah Baptist Church.

Still renting space at the Phineas Davis Auditorium, YLT wanted a home of its own. In 1949, plans were made to purchase a lot on McKenzie Street. Architect J. Alfred Hamme designed plans for a single-story theatre with 400 seats, dressing rooms and prop rooms. At a cost of $50,000, the Junior League agreed to help to raise funds, but in return, they wanted to build a larger building to be shared by both organizations. The cost escalated to $100,000, and the project never materialized. 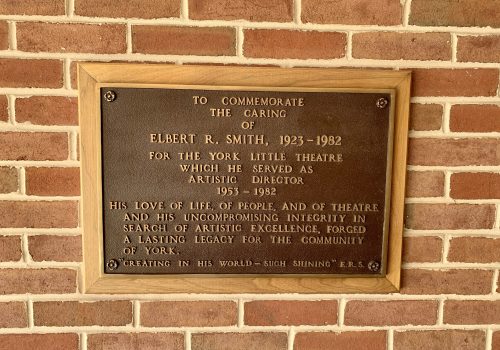 In July, 1953, YLT signed a lease-purchase agreement for the Elmwood Theatre, a former movie house. Here, YLT finally had its own home. With aggressive fundraising, YLT took title of the building in May, 1956, seven years ahead of schedule.

One of the most enduring fundraising projects in York County history was launched in 1958 with York Little Theatre’s Italian Steak Sandwich Stand at the York Fair. This tradition continues today and is as popular as ever!

The 1950’s also brought YLT the legendary Artistic Director Elbert (Bert) Smith. The next 30 years were known as the Golden Era, with Bert as the heart and soul of YLT. His creative talents and tireless efforts to present high quality performances resulted in decades of outstanding productions. Bert’s many contributions include bringing Shakespeare to the regular season of shows, shaping Studio Theatre to be a space for untraditional productions and having children perform the shows for the children’s theatre. Bert will always have a special place in the hearts of everyone associated with YLT.

At the forefront of stage excellence

In the 1960’s, YLT produced its first true musical, KNICKERBOCHER HOLIDAY. It featured the dynamic team of Wells Gemberling as Musical Director and Betty Dressner as Choreographer. Their combined talents ensured the success of YLT musicals for decades to come.

As YLT musicals became nationally renowned, Publisher Tams Witmark offered YLT the opportunity to be the first community theatre to produce HELLO, DOLLY! Rita Vasellas, a very talented local actress, starred in the production that also featured another local veteran, Kenny West. Exquisite costumes came from New York City and elaborate sets were built. The production was a huge success! Many other blockbuster musicals such as THE SOUND OF MUSIC, BYE, BYE BIRDIE and THE MUSIC MAN were highlights of the summers in York County.

YLT enjoyed decades of growth and success under Bert’s leadership. With his death in 1982, the York Community lost the epitome of what a theatre director should be. He will always be remembered as “a leader blessed with integrity, tenacity, a love of learning and the very deepest humility”.

In 1997, a 7,000 square-foot addition was added to the theatre. This $1.1 million fundraising effort was led by Henry Leader. The addition included a new costume shop, green room, dressing rooms, office space, additional backstage space and a Studio Theatre with seating for 110 patrons. Funding for the arts allowed performing arts programs to grow during this time. 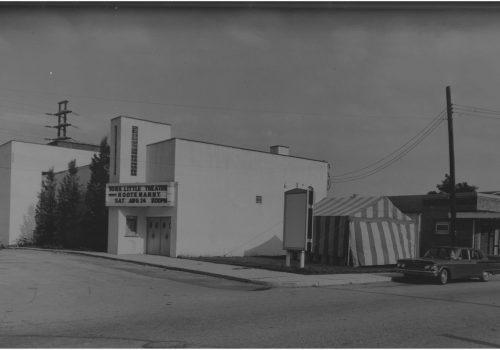 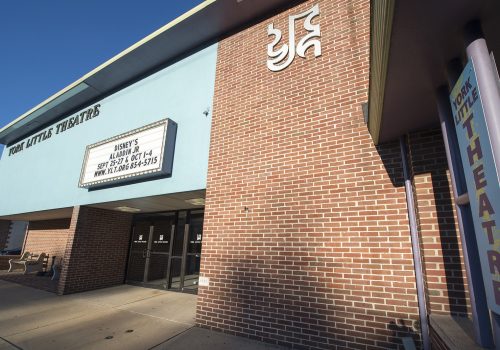 But as competition for contributions increased, the theatre’s financial position decreased. Through the 2000s, the theatre struggled, eventually coming to the point of questioning if YLT could stay in operation. In 2012, the Board of Directors reorganized, making drastic changes in governance, staffing and operations. They launched a Capital Campaign with the goal of raising $350,000 to eliminate debt and restore the building. 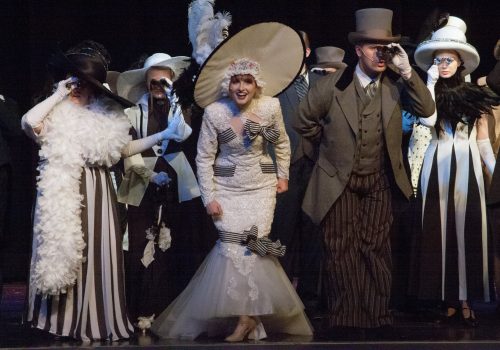 Reaching for the stars...

Today, that goal has been reached and the theatre is thriving once again! With all debt paid off, a restructured Board of Directors, professional staff and a newly renovated facility, this theatre is producing shows that are gleaning praise from the entire Central PA region. Critiqued on Broadway World’s website, the reputation of the performances is attracting talent and audiences from a wide radius.

Along with these changes is a name change. YLT is now The Belmont Theatre. Located on Belmont Street since 1953, this name pays tribute to the many volunteers and staff who contributed so much to this organization. It also represents the outstanding quality of shows presented for people of all ages and interests.

The Belmont Academy is the educational component of the theatre, offering classes in a broad range of the performing arts. Everyone can participate at The Belmont in an array of instructional opportunities.

Whether on stage or off, The Belmont Theatre offers volunteers the chance to share their talents, creativity and self-expression. Here they can be a part of something bigger than themselves. The Belmont is a treasured part of the York Community and will continue to offer live theatre for decades to come.

Our stage lights have been dim since March of 2020, due to the pandemic… but we look forward to a bright future when we can safely raise our curtain again in 2021!

Our theatre company consists of talented volunteers who audition. Interested in auditioning? Please go to our auditions page for details and to make an appointment.

Our board consists of community leaders who are passionate about The Belmont’s mission.

You do not have to be on stage to play a major role! There are numerous ways to volunteer or to make a donation to play a significant part to help us continue to reach for the stars!

The options
Previous
Next

With their stage production ability rivaling any professional theatre, the Belmont in York has put together another high-quality event. (Legally Blonde)

-Jason Davis Broadway World
This production of MY FAIR LADY is in main part the production that most other productions want to be. It's musically lush, delightfully cast, and visually exciting. Staub knows his way around a large show, and he's put that knowledge to excellent use here. In a go big or go home world, this production goes that one step bigger than everyone else. (My Fair Lady)

-Marakay RogersBroadway World
This is simply one of the best community theaters alive. Here you can see a Broadway- style show in a theater where every seat is a good one.

-Greg S.Trip Advisor
Just attended The production of Frozen Jr. Wow! This was truly a wonderful, well-done, chock-full of talent production! I am so impressed with the level of regional talent and how the staff brought it all together. Great family theater experience.

-Susan McCeanFacebook
My daughter and I recently saw a production of "Little Shop of Horrors" at the Belmont Theatre. We are from Baltimore and traveled almost an hour to see the show as it's one of my favorites. I never knew this theatre existed and was extremely pleased to find this little gem. The production was top notch, from the actors to the props, the music and choreography and general warm hospitality from everyone. The actors came out and met with everyone afterwards and were so congenial and accommodating. I only wish I'd known it was there sooner, as looking back at some of the shows from the past, I would have loved to have seen them.